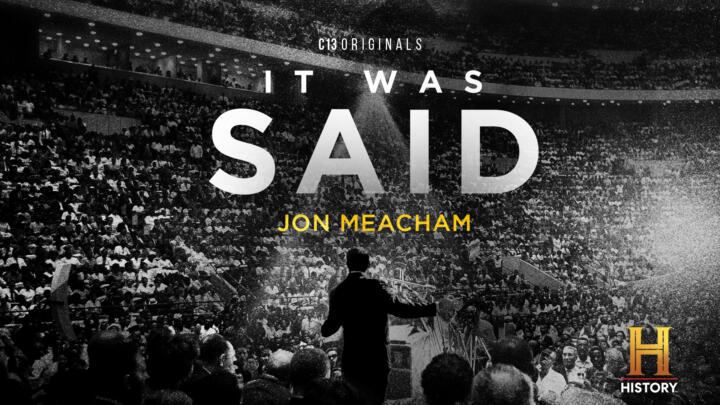 It Was Said Podcast

Words move humankind for good and for ill, and in the American experience our most important public speeches have been both mirrors and makers of the nation's manners and morals at key moments in our common life. Written and narrated by Pulitzer-Prize winning author, Jon Meacham, It Was Said, tells the stories of those crucial words, taking listeners back to inflection points ranging from the McCarthy era to our present time through the real-time rhetoric that shaped and suffused America as the country struggled through storm and strife. It Was Said captures the nation we've been, and points ahead to the nation we hope to become.

Created and produced by the Peabody-Award nominated documentary studio C13Originals, in partnership with HISTORY.

Theodore Roosevelt, Man In The Arena

Theodore Roosevelt, speaking at the Sorbonne in Paris, outlines the vital role and responsibility of the ordinary citizen in a republic. The words of Theodore Roosevelt are narrated by Joe Wiegand.

John F. Kennedy, We Choose To Go To The Moon

John F. Kennedy delivers a historic speech at Rice University on his daring and uncertain mission to land a man on the moon before the end of the decade.

Confronted with the impending threat of Nazi invasion, Winston Churchill outlines the stakes of the war and rallies the British people to fight on against seemingly insurmountable odds.

On a bright and snowy morning a young president summons a nation and a generation to the work of history with his enduring inaugural address. Learn more about your ad choices.

A twenty three year old John Lewis, speaking at the March On Washington, calls a nation to moral account. He didn’t want to be patient, he said. He wanted freedom now.

A daughter of the segregated south, Barbara Jordan, keynotes the Democratic National Convention of 1976. It was America’s bicentennial, and Jordan was a voice born in one nation speaking to the hopes of a better nation to come.

A demagogic politician, exaggerated claims, an insatiable thirst for attention and controversy, and a national climate of fear and anxiety. How Edward R. Murrow took on Senator Joseph McCarthy.

Special thanks to The Department of Special Collections and University Archives, Marquette University Libraries.

Ronald Reagan brings his long American odyssey to a close in his presidential farewell address, an evocation of America as a shining city on a hill. A nation that builds not walls but bridges.

Meghan McCain, and Her Father's America

Meghan McCain delivers a provocative eulogy for her father, the war hero and senator, John McCain, at Washington National Cathedral. It was a speech at once elegiac and resonant in the age of Trump.

Barack Obama goes to Charleston, South Carolina in the wake of a white supremacist’s massacre of innocents at Emanuel AME Church. In word and in song the 44th President contemplates tragedy and grace.

RFK, A Eulogy for King

Robert Kennedy learns of the MLK Jr.’s assassination while in route to a campaign event in inner city Indianapolis. He breaks the news to an unsuspecting crowd, delivering a spontaneous and empathetic eulogy for the apostle of nonviolence.

In one of the most tumultuous moments in American history, Martin Luther King Jr. travels to Memphis to address the issue of racial and economic injustice. With eloquent language and brilliant rhetoric, he creates a mosaic of the ongoing Civil Rights struggle, culminating with a fearless and defiant premonition.

Trailer: Welcome to It Was Said, with Jon Meacham

Welcome to Season One of It Was Said, a documentary podcast series that looks back on 10 of the most powerful, impactful and timeless speeches in American history. Written and narrated by Pulitzer Prize-winning and best-selling author-historian, Jon Meacham, created, directed and produced by C13Originals Studios, in association with History, the first two episodes will drop on Wednesday, September 2nd, 2020.

Apple Spotify Stitcher
The Apple logo, iPhone, iPod touch, and iTunes are trademarks of Apple Inc., registered in the U.S. and other countries..
By submitting your information, you agree to receive emails from HISTORY and A+E Networks. You can opt out at any time. You must be 16 years or older and a resident of the United States. More details:

Need help with the site?

Create a Profile to Add this show to your list!